Tanja Grandits is a morning person. The Swiss Chef of the Year 2020 loves to start the day in a fresh way, be carefree with whatever is coming and fortify herself with a vitamin-rich breakfast. "I am convinced that you can learn better, concentrate better and cope better with your workload if you eat something good in the morning," says the chef of Restaurant Stucki in Basel (19 Gault Millau points).
At Grandits’ house it is primarily daughter Emma who can enjoy a varied breakfast. "I prepare four kinds of meals for her every day, consisting of fresh fruit, fruit juice, macha latte or chai latte and a warm dish," says Grandits. The latter can be toast with avocado, an omelette with fresh mushrooms, pancakes - or in winter a fine porridge with cinnamon and apple compote.
When things have to go quickly, Tanja Grandits prepares the Mango-OatBowl - a mixed, creamy muesli with oat flakes, oat milk and mango from the Novis ProBlender high-performance blender. "One of my insider tips for a quick, healthy breakfast that doesn't weigh you down early in the morning."
On the weekend, breakfast turns into a mezze table
Grandits doesn't usually prepare a full breakfast for herself during the week. For a specific reason: "I regularly have lunch with my team in the restaurant at 11 o'clock. A hearty breakfast at 8 a.m. would be too much of a good thing on these days. I then content myselb with a macha latte or something similar."
On the weekend, the cook enjoys an extended breakfast even more. She likes to celebrate the first meal of the day with her daughter or extended family - to unwind after a hectic week at work. Or she gathers friends around her. "I find breakfast a very nice, relaxed way to invite people over," she says. "You can start the day together, your thoughts are still fresh and not as influenced by the working day as they are in the evening. And you're less under time pressure than at dinner when you don't have to constantly squint with one eye on the last train or get up early the next day."
The fine things Grandits conjures up for her daughter on the breakfast table during the week can also be found on the Sunday table, either in this form or in a modified form. Grandits likes to serve burrata with tomatoes, oriental dishes such as pita bread with hummus or shakshuka with peppers, or Far Eastern dishes such as fried rice and fried noodles with eggs. "Our breakfast often resembles a small mezze table," she says.
One of the favourites is the Japanese omelette with sushi rice and cucumber salad. While preparing it, a morsel is always left for Norma the dog. Grandits' French bulldog suffers from a food allergy and is only allowed to eat special diet food - and cucumber. "We feel sorry for her that she can practically only tolerate this dry special food. That's why I regularly give her a little cucumber or watermelon. She likes both of those."
Jam and honey not on the bread
Back to brunch - and to bread. Grandits loves it especially in a toasted form, prepared in the Novis toaster, which can also be used to toast thicker slices. "These are nice and crispy on the outside and nice and soft on the inside - that's how I like it best!" For Grandits, the best accompaniment is avocado or aubergine spread. By contrast, she is less likely to serve breakfast classics such as jam or honey bread.
"We all like jam and honey, but we combine them differently," says the cook and author. "For example, we drizzle chestnut honey on our fine homemade goat's curd. And we refine crêpes with passion fruit rhubarb or raspberry jam."
Grandits' passion: fruit juice
The star chef's kitchen is also fruity when it comes to the various breakfast drinks. Grandits' absolute favourite is a carrot-pineapple juice with ginger. She prepares it with the VitaJuicer from Novis. "A yoga teacher from India gave me the recipe many years ago. In Ayurvedic teachings, the fruit trio is considered the perfect combination for finding oneself and being focused. Ideal for breakfast, refreshing and invigorating." She can't be without ginger any more anyway, adds Grandits. Besides the juice, she also likes to drink the spicy tuber as a tea, brewed with water from the Novis kettle. "Ginger is simply good for me!"
In addition, the avowed juice fan also likes combinations such as carrot/mango/turmeric - or celery, pear and mint, with a good dash of lime. 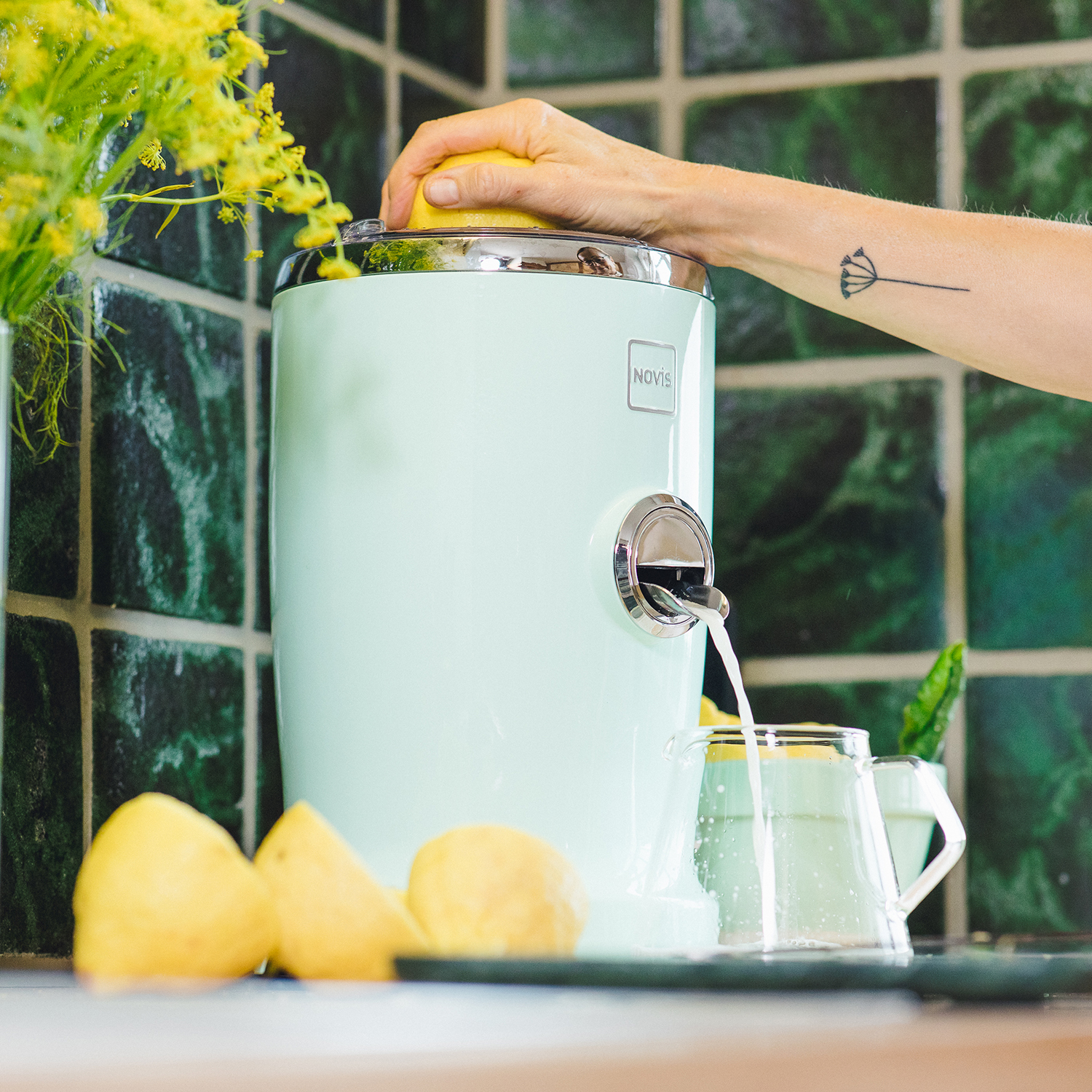 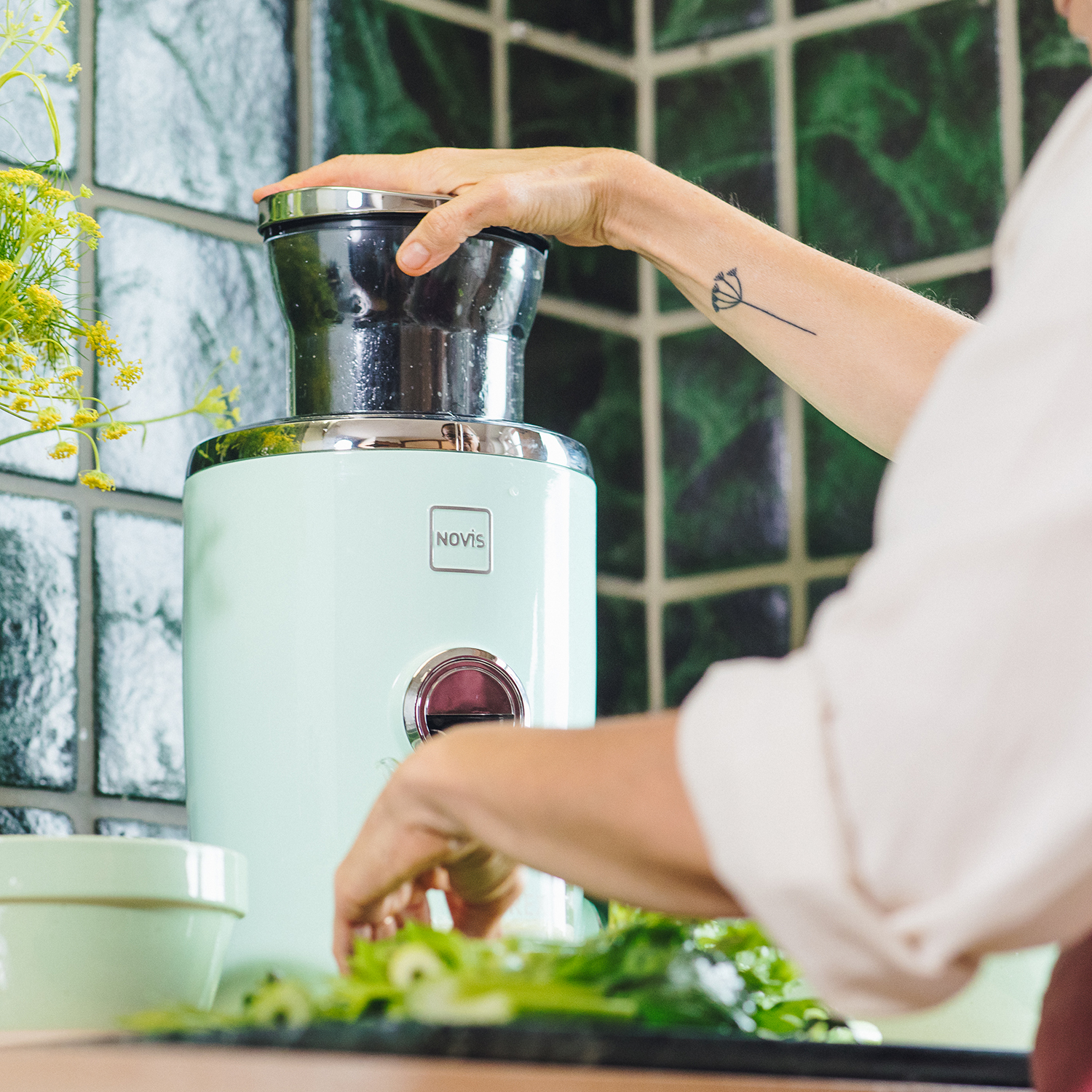 “I like to surround myself with beautiful things that bring me joy every day. That’s why getting up in the mornings and making our breakfast using Novis appliances is such a crucial part of my quality of life”. 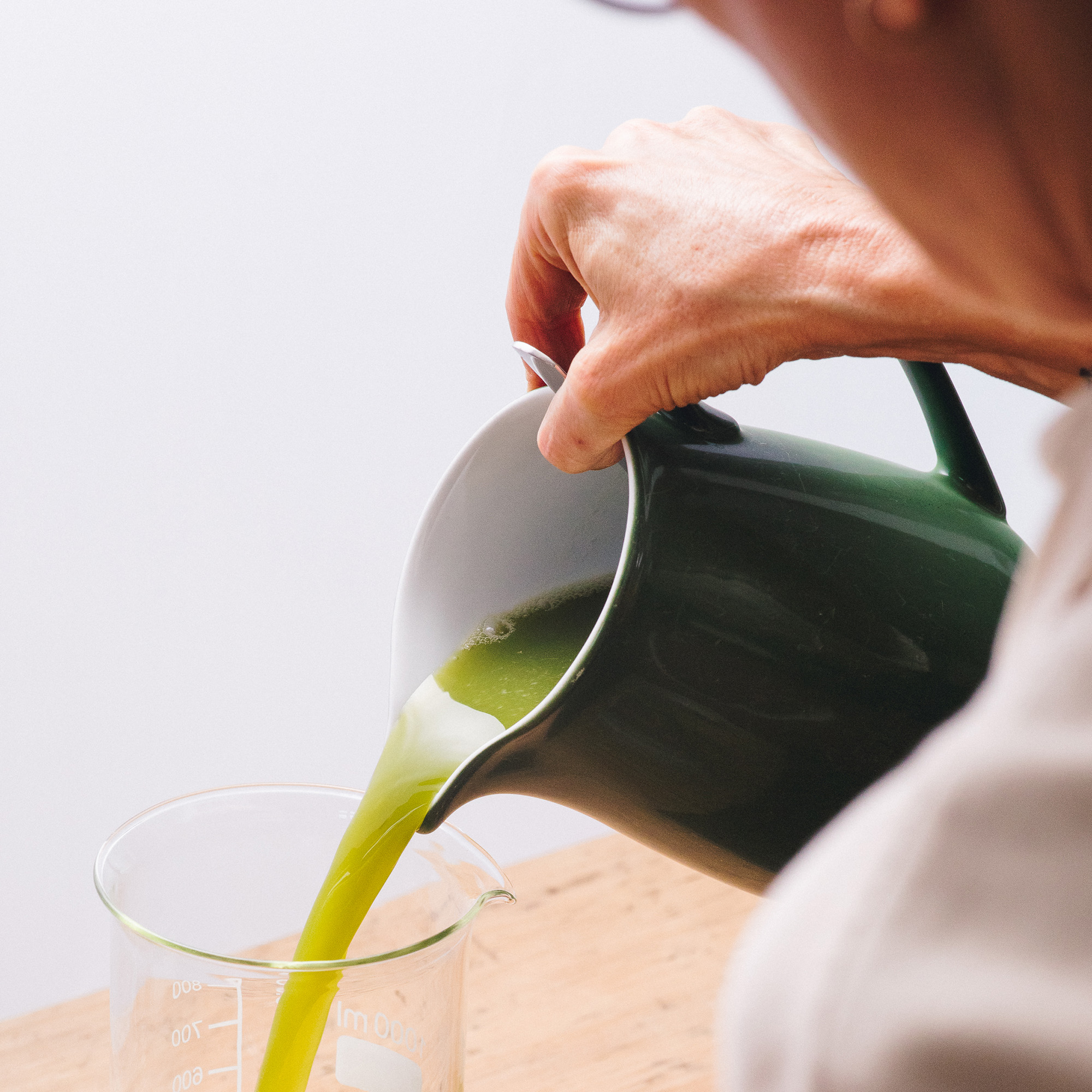